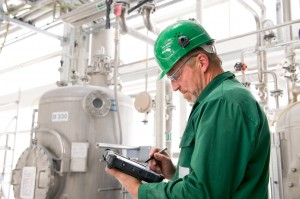 Tablets are now a sought after commodity in the electronics trade, with features and functions that can typically replace those of other devices, such as laptops, desktop PCs, MP3 players and, for some models, even a mobile phone.

In general, there are three kinds of tablets available on the market: the convertible, the slate, and the rugged tablet. The slate is the flat topped tablet that we all know and love, and the convertible is a hybrid between a slate and a laptop. In terms of form, the rugged tablet computer is the type of tablet which lends itself best to frequent and prolonged use in strenuous and extreme conditions.

A rugged tablet computer is shaped like a slate, so the screen has no covering. However, given its descriptive name, it is very durable and designed to withstand extreme temperatures and conditions, as well as rough handling. This is due in part to the protective casing that comes with the product, as well as the shock-proofed hard drive in the system.

Rugged tablets are admittedly more expensive than their convertible or slate counterparts, so there had better be enough features to justify its purchase. Aside from its durability, a rugged tablet is designed for use in an industrial setting, rather than a casual one, so the device is already equipped with applications that provide extra services that are handy during specific situations, such as high-speed access to secure Internet connections, RFID technology, bar code scanners and hot swappable batteries, to name a few.

The sudden burst in popularity of tablet computers in the past few years is just representative of their usefulness and functionality in a fast paced society. Rugged tablets are just one step further in that direction, by bringing the usage to demanding environments by making them resistant to shock, vibration, dust and a variety of other environmental factors. They might be just the thing you need.