When it comes to hard drives, information is only as powerful as our ability to access it. In a sense, a stockpile of data has its uses, but it is the correlation and aggregation of statistics or files that create its true worth. Getting information quickly is only half the equation. The other side of the issue is storage space.

Hard drive space is relatively economical, considering how much is being offered; a terabyte can cost a pittance when stacked against other components. Traditional SATA drives are spinning discs with mountains of information. It’s when we move into the territory of flash memory drives, however, that the discussion changes.

There are a couple of different standards for flash memory; the two discussed here are solid state drives (or SSD hard drives) and disc on module SATA drives. Both approach the issue of data storage from a similar standpoint; using flash memory to store data increases write and read speeds and provides other benefits over traditional HDDs. But there are also differences worth noting. Read on to learn more!

In the sense of pure data storage, the most defining feature of these two standards is the blistering speed at which they can read and write information. Rather than having a magnetic arm writing data to a spinning plate like a traditional hard drive, SSDs and disc on module drives have a series of integrated circuits to store the information. This means that data can be quickly stored and pulled from the drive in a fraction of the time required by a traditional HDD. In practice, this means that programs installed to the SSD or disc on module SATA load faster, and computer boot up times are almost instantaneous.

Essentially, an SSD hard drive and disc on module SATA eliminate any moving parts for data storage and consequently, a number of issues with normal HDDs are remedied. For instance, any jostling or sudden movement will not harm a drive with solid state memory. Heat generation is also greatly reduced because there are no moving parts to generate friction. SSDs and disc on module drives create almost no noise. Both standards provide a great solution to the challenges of data storage.

What Separates an SSD Hard Drive from a SATA DOM? 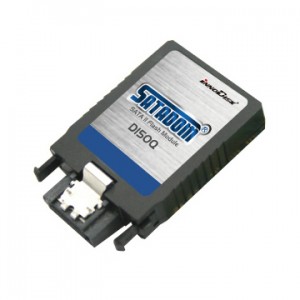 The main point that differentiates an SSD from a SATA DOM drive is size. When it comes to pure data storage capabilities, an SSD hard drive outclasses the diminutive DOM SATA standard. The latter is rarely manufactured to store anything more than 64 gigabytes, while SSDs can reach upwards of 500 gigs. However, cost can be somewhat prohibitive when shopping for SSDs, as larger drives in the SSD format can be pricey and therefore not cost effective for large scale storage. In contrast with the cheaper SATA DOMs, which are ideal for holding an operating system and other small footprint software.

The method of connection of these two hard drive styles are also quite dissimilar. DOM SATA drives hook directly into the motherboard of embedded systems, either in a vertical or horizontal orientation, not unlike a USB key. An SSD hard drive uses a cable connector from the drive to the motherboard. This means that in a space sensitive environment, the SATA DOM wins out every time.